This document defines the data structures required for passing sequences of columnar data between Operators.

ValueVectors should support operators written in C/C++/Assembly. To support this, the underlying ByteBuffer will not require modification when passed through the JNI interface. The ValueVector will be considered immutable once constructed. Endianness has not yet been considered.

Reading a random element from a ValueVector must be a constant time operation. To accomodate, elements are identified by their offset from the start of the buffer. Repeated, nullable and variable width ValueVectors utilize in an additional fixed width value vector to index each element. Write access is not supported once the ValueVector has been constructed.

ValueVectors utilize one or more buffers under the covers. These buffers will be drawn from a pool. Value vectors are themselves created and destroyed as a schema changes during the course of record iteration.

Each value in a Value Vector is of the same type. The Record Batch implementation is responsible for creating a new Value Vector any time there is a change in schema.

The canonical source for value type definitions is the Drill Datatypes document. The individual types are listed under the ‘Basic Data Types’ tab, while the value vector types can be found under the ‘Value Vectors’ tab.

An operator is responsible for transforming a stream of fields. It operates on Record Batches or constant values.

A set of field values for some range of records. The batch may be composed of Value Vectors, in which case each batch consists of exactly one schema.

The value vector is comprised of one or more contiguous buffers; one which stores a sequence of values, and zero or more which store any metadata associated with the ValueVector.

A ValueVector stores values in a ByteBuf, which is a contiguous region of memory. Additional levels of indirection are used to support variable value widths, nullable values, repeated values and selection vectors. These levels of indirection are primarily lookup tables which consist of one or more fixed width ValueVectors which may be combined (e.g. for nullable, variable width values). A fixed width ValueVector of non-nullable, non-repeatable values does not require an indirect lookup; elements can be accessed directly by multiplying position by stride.

Fixed width ValueVectors simply contain a packed sequence of values. Random access is supported by accessing element n at ByteBuf[0] + Index * Stride, where Index is 0-based. The following illustrates the underlying buffer of INT4 values [1 .. 6]: 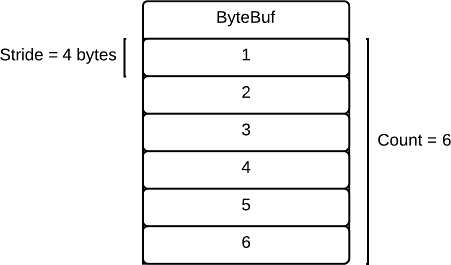 Nullable values are represented by a vector of bit values. Each bit in the vector corresponds to an element in the ValueVector. If the bit is not set, the value is NULL. Otherwise the value is retrieved from the underlying buffer. The following illustrates a NullableValueVector of INT4 values 2, 3 and 6: 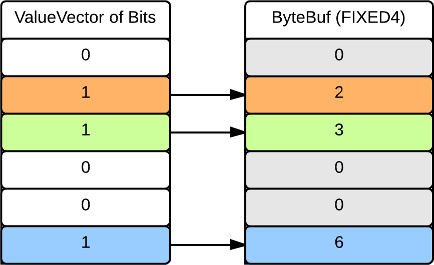 A repeated ValueVector is used for elements which can contain multiple values (e.g. a JSON array). A table of offset and count pairs is used to represent each repeated element in the ValueVector. A count of zero means the element has no values (note the offset field is unused in this case). The following illustrates three fields; one with two values, one with no values, and one with a single value: 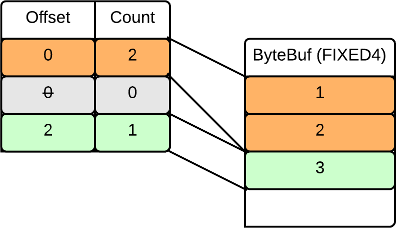 ValueVector Representation of the equivalent JSON:

Variable width values are stored contiguously in a ByteBuf. Each element is represented by an entry in a fixed width ValueVector of offsets. The length of an entry is deduced by subtracting the offset of the following field. Because of this, the offset table will always contain one more entry than total elements, with the last entry pointing to the end of the buffer. 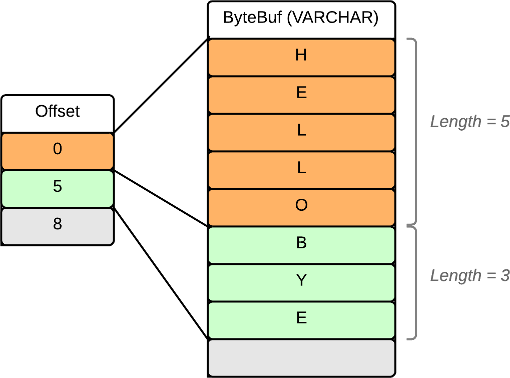 A repeated map vector contains one or more maps (akin to an array of objects in JSON). The values of each field in the map are stored contiguously within a ByteBuf. To access a specific record, a lookup table of count and offset pairs is used. This lookup table points to the first repeated field in each column, while the count indicates the maximum number of elements for the column. The following example illustrates a RepeatedMap with two records; one with two objects, and one with a single object: 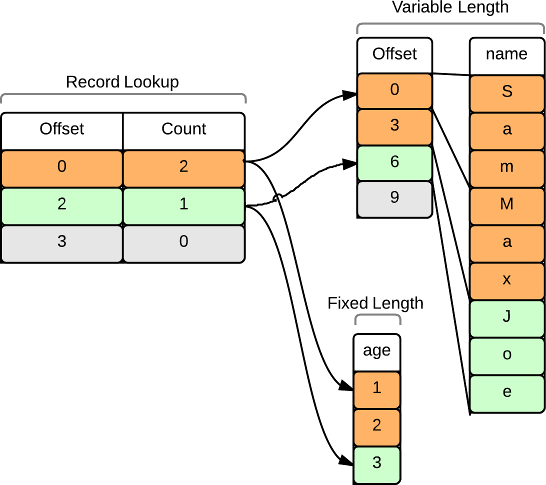 ValueVector representation of the equivalent JSON:

A Selection Vector represents a subset of a ValueVector. It is implemented with a list of offsets which identify each element in the ValueVector to be included in the SelectionVector. In the case of a fixed width ValueVector, the offsets reference the underlying ByteBuf. In the case of a nullable, repeated or variable width ValueVector, the offset references the corresponding lookup table. The following illustrates a SelectionVector of INT4 (fixed width) values 2, 3 and 5 from the original vector of [1 .. 6]: 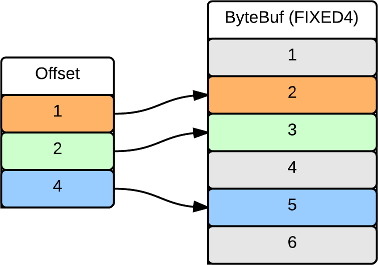 The following illustrates the same ValueVector with nullable fields: