This tutorial covers how to analyze Twitter data in native JSON format using Apache Drill. First, you configure an environment to stream the Twitter data filtered on keywords and languages using Apache Flume, and then you analyze the data using Drill. Finally, you run interactive reports and analysis using MicroStrategy.

Configuring the environment on Amazon Web Services (AWS) consists of these tasks:

You need to provision a preconfigured MapR node on AWS named ami-4dedc47d. The AMI is already configured with Flume, Drill, and specific elements to support data streaming from Twitter and Drill query views. The AMI is publicly available under Community AMIs, has a 6GB root drive, and a 100GB data drive. Being a small node, very large volumes of data will significantly decrease the response time to Twitter data queries.

MicroStrategy provides an AWS instance of various sizes. It comes with a free 30-day trial for the MicroStrategy instance. AWS charges still apply for the platform and OS.

To provision the MicroStrategy node in AWS:

Make sure that the MicroStrategy instance has a Public IP; elastic IP is preferred but not essential.

The instance is now accessible with RDP and is using the relevant AWS credentials and security.

You need to configure MicroStrategy to integrate with Drill using the ODBC driver. You install a MicroStrategy package with a number of useful, prebuilt reports for working with Twitter data. You can modify the reports or use the reports as a template to create new and more interesting reports and analysis models.

You can test and modify the reports in MicroStrategy Developer. Configure permissions if necessary.

There are 18 reports in the package. Most reports prompt you to specify date ranges, output limits, and terms as needed. The package contains reports in three main categories:

You can copy and modify the reports or use the reports as a template for querying Twitter data using Drill.

The MicroStrategy Developer reports are located in the Public Objects folder of the project you chose for installing the package. 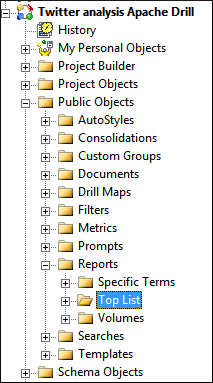 Many of the reports require you to respond to prompts to select the desired data. For example, select the Top Hashtags report in the right-hand column. This report requires you to respond to prompts for a Start Date and End Date to specify the date range for data of interest; by default, data for the last two months, ending with the current date is selected. You can also specify the limit for the number of Top Hashtags to be returned; the default is the top 10 hashtags.

When you click Finish a bar chart report with the hashtag and number of times it appeared in the specified data range appears. 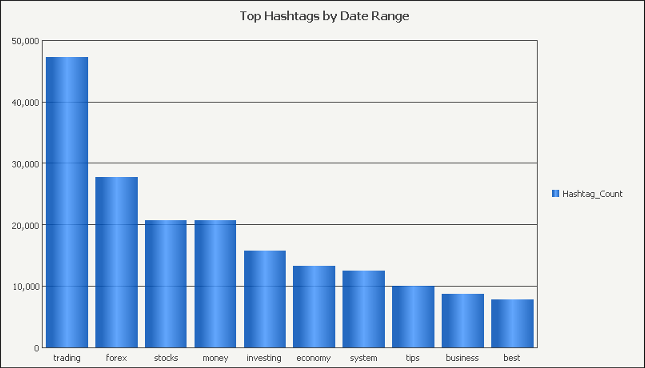 Other reports are available in the bundle. For example, this report shows total tweets by hour: 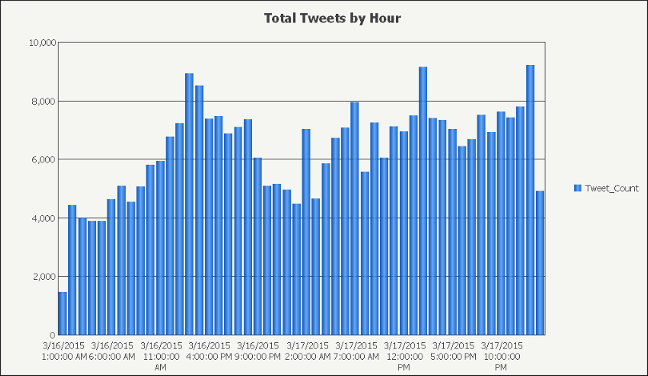 This report shows top Retweets for a date range with original Tweet date and count in the date range.

In this tutorial, you learned how to configure an environment to stream Twitter data using Apache Flume. You then learned how to analyze the data in native JSON format with SQL using Apache Drill, and how to run interactive reports and analysis using MicroStrategy.