When you submit a Drill query, a client or an application sends the query in the form of an SQL statement to a Drillbit in the Drill cluster. A Drillbit is the process running on each active Drill node that coordinates, plans, and executes queries, as well as distributes query work across the cluster to maximize data locality.

The following image represents the communication between clients, applications, and Drillbits: 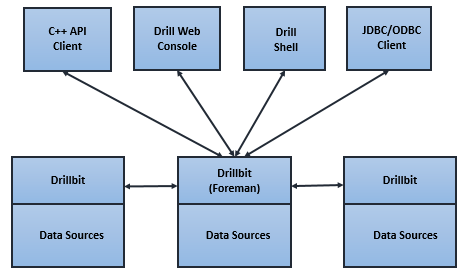 The Drillbit that receives the query from a client or application becomes the Foreman for the query and drives the entire query. A parser in the Foreman parses the SQL, applying custom rules to convert specific SQL operators into a specific logical operator syntax that Drill understands. This collection of logical operators forms a logical plan. The logical plan describes the work required to generate the query results and defines which data sources and operations to apply.

A parallelizer in the Foreman transforms the physical plan into multiple phases, called major and minor fragments. These fragments create a multi-level execution tree that rewrites the query and executes it in parallel against the configured data sources, sending the results back to the client or application. 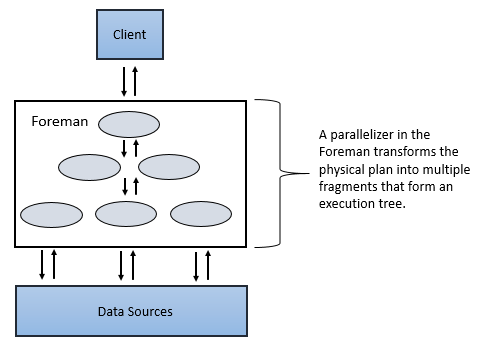 A major fragment is a concept that represents a phase of the query execution. A phase can consist of one or multiple operations that Drill must perform to execute the query. Drill assigns each major fragment a MajorFragmentID.

Drill uses an exchange operator to separate major fragments. An exchange is a change in data location and/or parallelization of the physical plan. An exchange is composed of a sender and a receiver to allow data to move between nodes.

Major fragments do not actually perform any query tasks. Each major fragment is divided into one or multiple minor fragments (discussed in the next section) that actually execute the operations required to complete the query and return results back to the client.

You can work with major fragments within the physical plan by capturing a JSON representation of the plan in a file, manually modifying it, and then submitting it back to Drill using the SUBMIT PLAN command. You can also view major fragments in the query profile, which is visible in the Drill Web UI. See EXPLAIN and Query Profiles for more information. 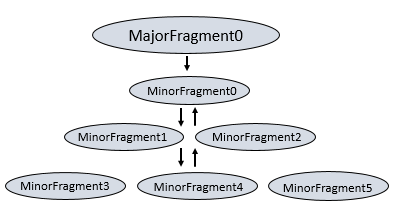 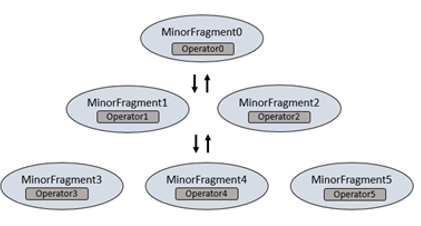 The root fragment runs in the Foreman and receives incoming queries, reads metadata from tables, rewrites the queries and routes them to the next level in the serving tree. The other fragments become intermediate or leaf fragments.

Intermediate fragments start work when data is available or fed to them from other fragments. They perform operations on the data and then send the data downstream. They also pass the aggregated results to the root fragment, which performs further aggregation and provides the query results to the client or application. 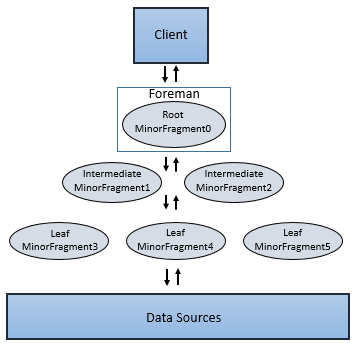